Chloé Chabanole started playing violin at a young age in her hometown of Regina, Saskatchewan. She completed a bachelor’s degree in violin performance at the Conservatory of Amsterdam under Johannes Leertouwer as well as a master’s degree and performance diploma at the Université de Montréal under Laurence Kayaleh. She has taken part in numerous international orchestral and chamber music festivals, including the Gustav Mahler Jugendorchester, the Schleswig-Holstein Music Festival, the St. Lawrence String Quartet Seminar at Stanford University, the Toronto Summer Music Festival, the Accademia Mahler in Bolzano, Italy, the Colorado College Summer Music Festival and the Rendez-vous musical de Laterrière. Chloé plays regularly with the Orchestre Métropolitain, I Musici de Montréal, collectif9 and Warhol Dervish, and she currently serves as concertmaster of the Orchestre de l’Agora.

Born in Montreal, Julien Patrice recently completed his university studies in classical violin. He acquired his most recent diplomas at the University de Montréal under the direction of Claude Richard. Julien holds a Master’s Degree in interpretation and a D.E.P.A. and he currently evolves in the music scene throughout Quebec.

In addition to his positions as Assistant second violin of the Orchestre symphonique de Trois-Rivières, section violin at the Sinfonia de Lanaudière, and his position of Principal Second violin at the Orchestre de l’Agora, Julien Patrice performs with several ensembles including I Musici, FILMharmonique de Montréal, Orchestre classique de Montréal, the Laval, Québec and Sherbrooke symphony orchestras, as well as several other small ensembles. He also performs as a soloist with the Orchestre de l’Agora and the Sinfonia de Lanaudière.

Julien Patrice is part of the Magillah music group, allowing him to explore and develop other aspects of his musicality; especially the world of klezmer, music from Eastern Europe and vocal singing. More recently and alternately to his work as a musician, Julien Patrice now holds the position of Orchestra manager within the administrative team of the Orchestre de l’Agora. He is responsible of the recruitment of musicians and internal communications with the musicians of the Orchestra.

Always seeking to express his creativity through art, Julien is also devoted to photography in his spare time, he specializes mainly in portraits and artists photos. Finally, being a versatile musician, Julien Patrice works on several projects in a committed way in order to continually develop his musical skills and to evolve personally as an artist. 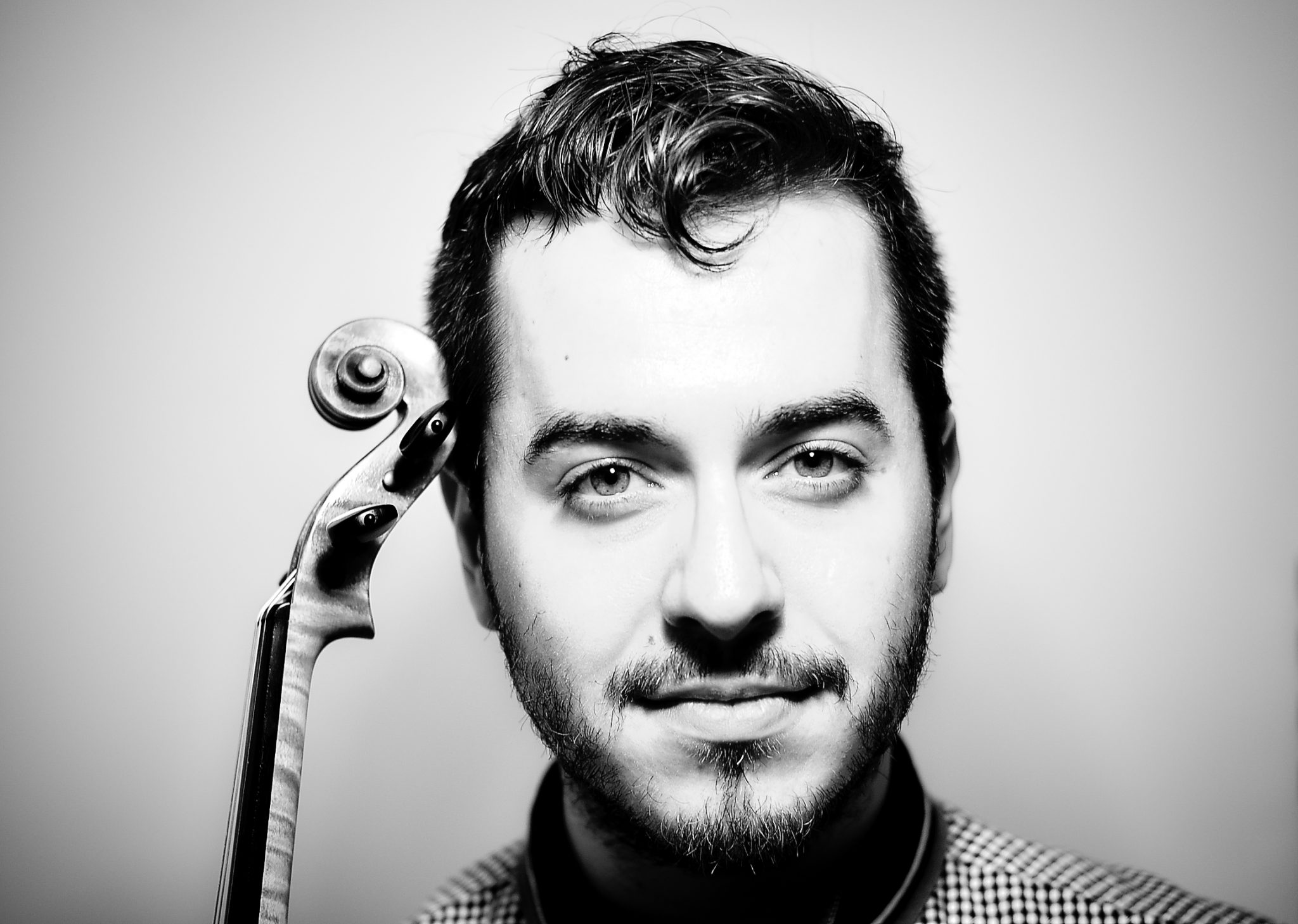 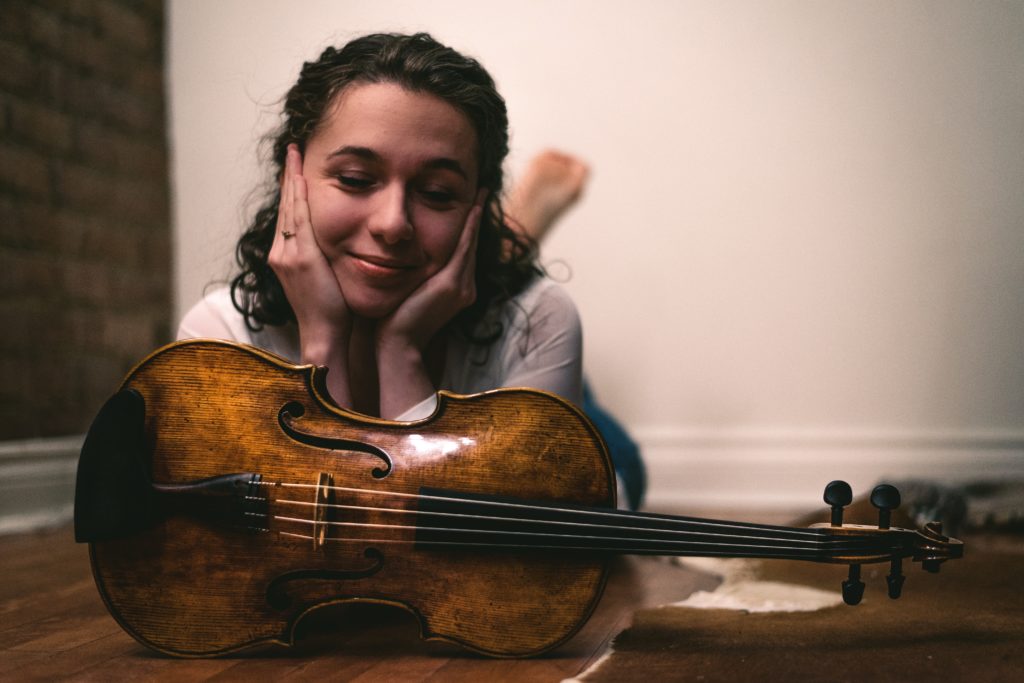 Born in 1994, Cynthia Blanchon is a French violist based in Montreal, QC. An active musician, she has been seen taking part in the AuditionPerform Festival, Rencontres Musicales de Haute-Provence, ISA festival, Rencontres Musicales de St-cézaire and in the Osmose Ensemble. Her passion for chamber music started early when performed at the CNSMD in Lyon alongside Marc Danel and Yovan Markovich from the Ysaÿe quartet, an experience which lead to several others. She has collaborated with Rainer Küchl (Concertmaster of the Vienna Philharmonic), Scott St.John within the Colburn Chamber Music Society and the Talich quartet.

An experienced orchestra musician, she is currently principal viola with the Orchestre de l’Agora. During the summer 2018, she participated in the Pacific Music Festival in Sapporo, Japan where she was co-principal. She has collaborated with conductors such as Valery Gergiev and Esa-Pekka Salonen performing in Suntory Hall in Tokyo, Walt Disney Concert Hall in Los Angeles, Maison Symphonique in Montreal, National Arts Center in Ottawa and the Auditorium in Lyon (France). She performs regularly with the Montreal Chamber Orchestra, New Generation Orchestra and the Thunder Bay Symphony Orchestra.

She is currently completing her doctorate under the supervision of Jutta Puchhammer. Previous studies include the Colburn School in Los Angelas and the CNSMD in Lyon where she began her undergraduate at age 16. Her eagerness to learn led her to work with the finest violist such as Juan-Miguel Hernandez, Hartmut Rhode, Barbara Westphal, Gilad Karni, Garth Knox or Hariold Schlichtig.

A prize-winner in many national competitions (Lempdes, Toulouse, Mouans-Sartoux), she also won the Mécénat Musical Société Général competition in 2015 which allowed her to play on a Von Baehr viola for three years. Cynthia plays on a Kalata viola made in 2016 and on a bow made by Arnaud Suard in 2008.

Thomas plays on an Italian cello made by Pietro Antonio Cateni in Livorno, c. 1790-1810, with a bow made by Montreal bow-maker François Malo. The cello and the bow are provided graciously to him by CANIMEX INC., Drummondville, (Quebec) Canada. 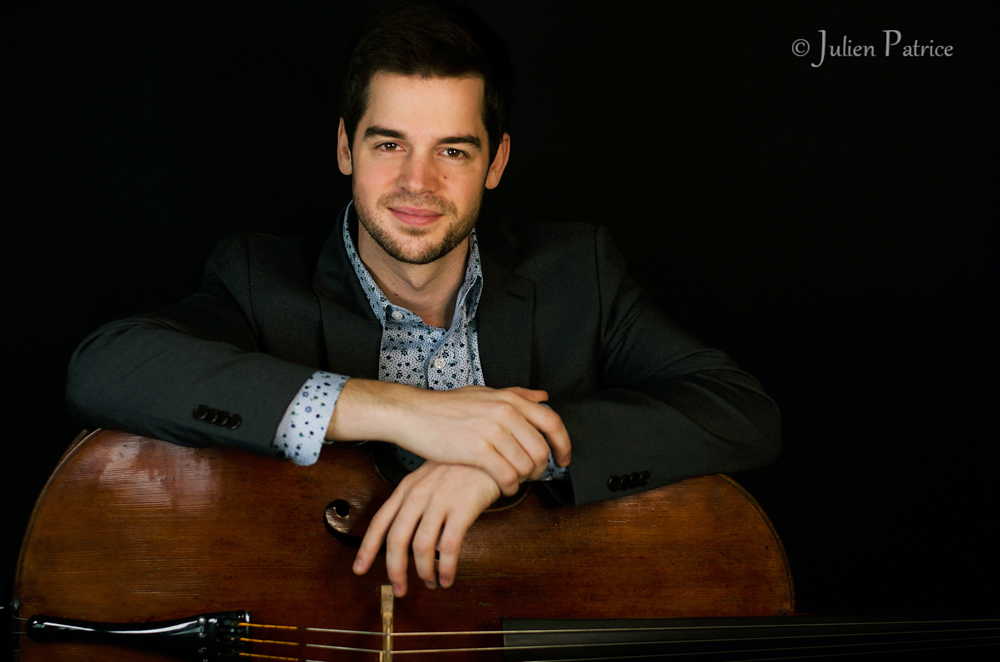 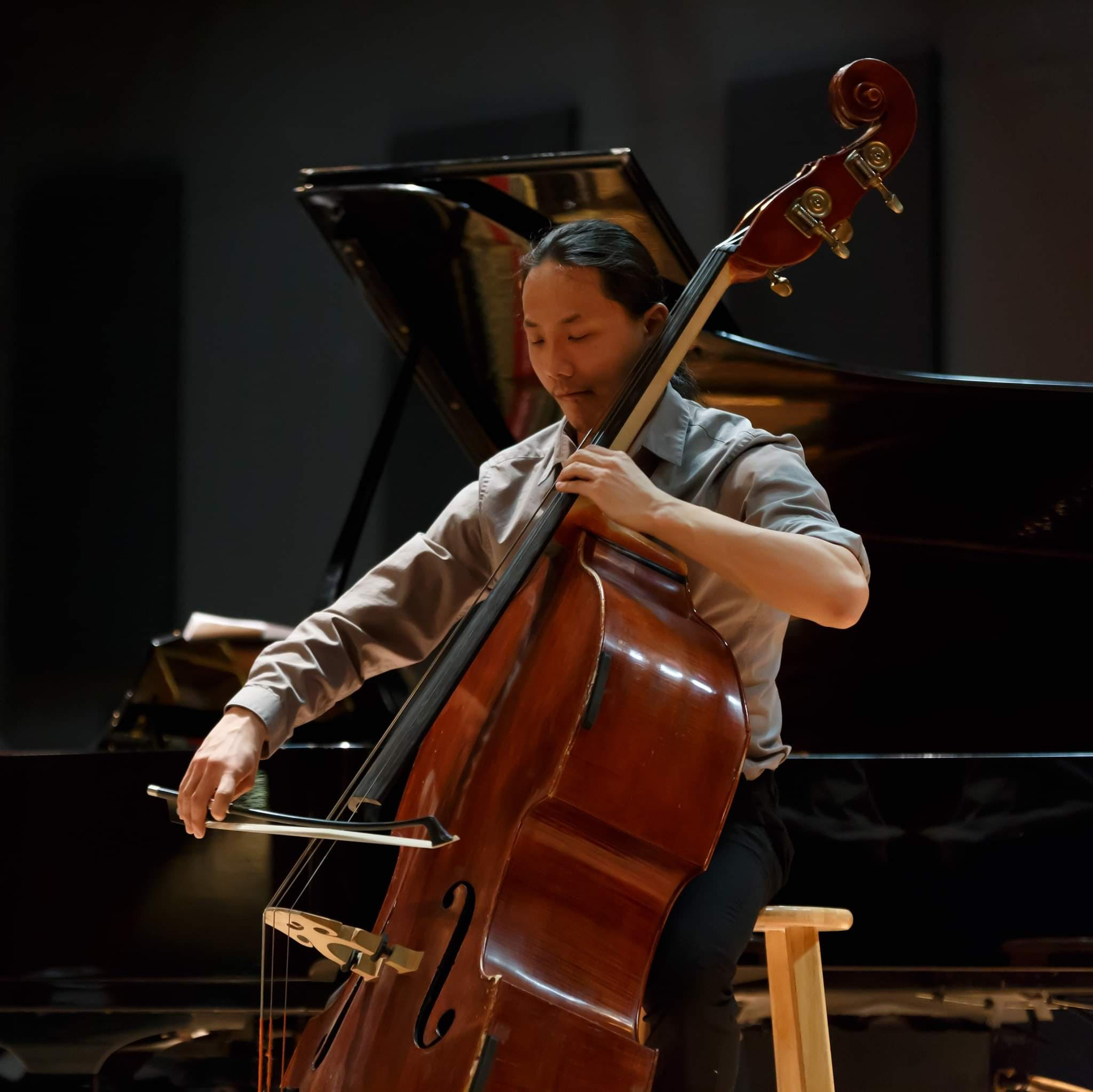 Native from Saguenay Lac St-Jean, Samuel-San Vachon learned the violin and the cello before he started the double bass at 18 years old. Aged 25, he is currently doing a master degree at Mcgill University in double bass perfmormance with Ali Yazdanfar, principal bass at OSM. This young artist recently got a job at the OSO as assistant principal bass. Also, he is the principal bass of the Orchestre de l’Agora and he frequently subs with theMcgill Chamber Orchestra and l’Orchestre Symphonique de Drummondville.

Recently , Samuel-San  played   his  first concert with the OSM. Furthermore, he was member of the National Youth Orchestra of Canada for the past three years, which he received the award of excellence  twice.

Born in Mont-Tremblant, Noémie Caron-Marcotte begins learning the flute at the age of 6 with Claire Marchand at the McGill University Music Conservatory. She stands out during all her childhood by winning several competitions: 1st prize at the Concours des jeunes musiciens des Laurentides and 2nd place in her category at the Canadian Music Competition.

In 2017, Noémie completed a D.E.S.S. in orchestral excerpts at the piccolo under the direction of Ms. Caroline Séguin, Principal piccolo at the Orchestre Métropolitain. This specialization allows her to stand out at international auditions. She was a finalist for the position of Principal Piccolo at Florida Orchestra (May 2017), Nashville Symphony (April 2018) and San Diego Symphony (January 2019).

Noémie is now Principal Flute of the Orchestre de l’Agora, conducted by Nicolas Ellis, and joins in as a freelancer at the Orchestre Métropolitain, the Orchestre symphonique de Trois-Rivières as well as ensembles within different musical styles, such as Oktopus.

A fine pedagogue and a valued teacher, she is also involved in many educational projects in the greater Montreal area, communicating her passion and her art. 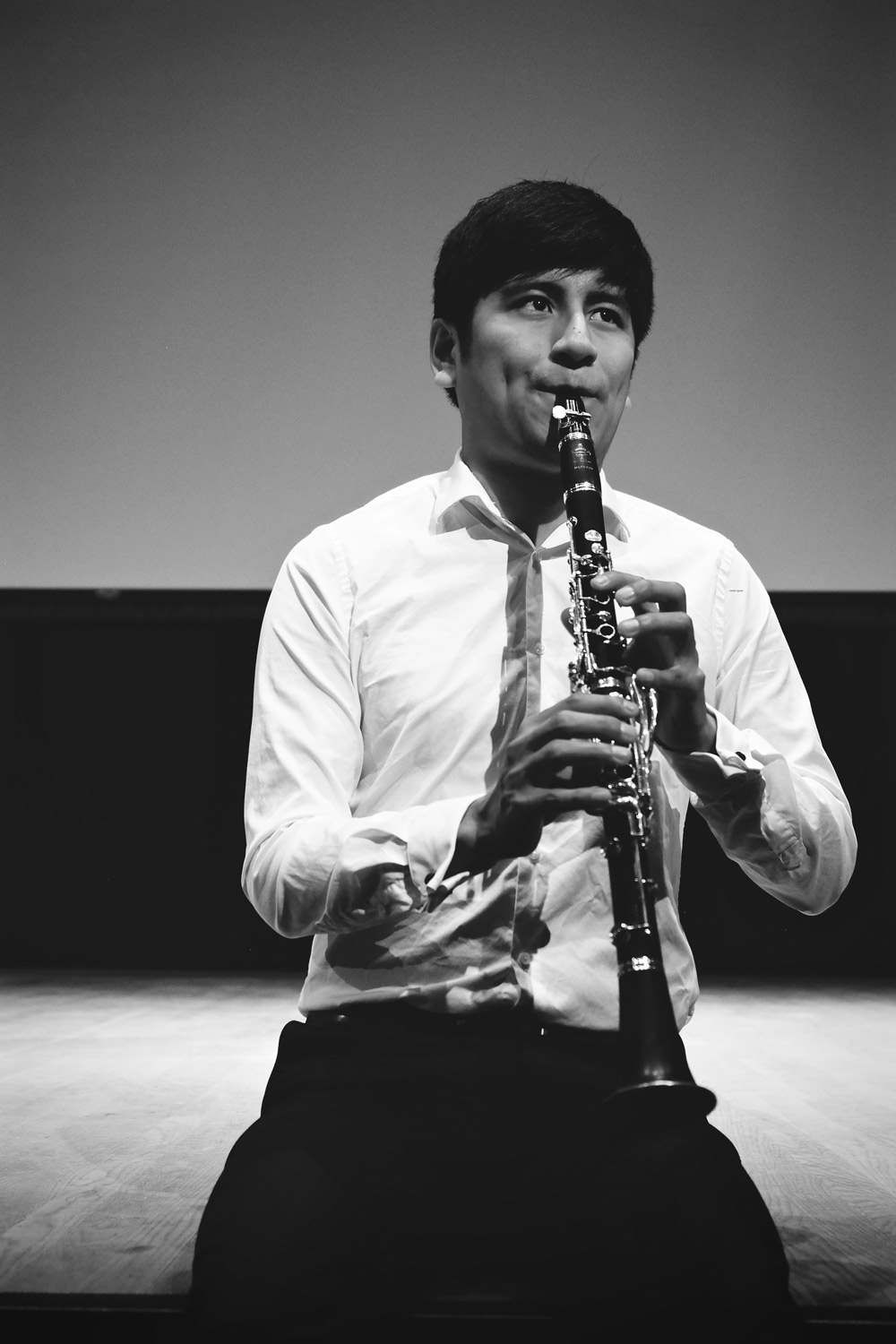 Pedro Molina began playing clarinet at the age of 11, studying first with his father before moving on at the age of 15 to the National Conservatory of Music in Peru. In 2007, he relocated to France to study at the Conservatoire de Bordeaux with Richard Rimbert and in 2013, he obtained his master’s degree from the University of Montréal in the class of André Moisan.

In the final year of his master’s degree, Pedro won first prize in the University of Montréal’s Concerto Competition and he was also invited to participate in Denmark’s prestigious Carl Nielsen competition.

In 2007, Victor received his classical training from Richard Rimbert and Stéphane Kwiatek at the Bordeaux Conservatory in France. In 2012, he moved to Canada to study with André Moisan at the University of Montreal where he completed his undergraduate degree. During his studies, Victor attended numerous masterclasses and had the chance to meet many great masters of the clarinet, such as Philippe Berrod, Martin Fröst, Jérôme Voisin and Philippe-Olivier Devaux.

Versatile musician, Victor Alibert has always been interested in classical and traditional music. Playing clarinets from the Eb to the bass, Victor actually performs in various styles going from Symphonic concerts with the Orchestre de l’Agora, Eastern European music with the Magillah and the Fanfare Carmagnole, and contemporary chamber music with the Paramirabo Ensemble.

With social projects at heart, Victor frequently collaborates with Les Porteurs de Musique, a social ensemble that hosts events in venues like shelters, hospitals and psychiatric institutes. Victor is also a percussionist in the batucada Movimento. He has been teaching clarinet since 2013 at Collège Notre Dame, and has been invited to teach masterclasses at the Domaine Forget and the Waterloo Region Contemporary Music Session with the Paramirabo Ensemble.

In 2013, Victor Alibert was also the winner of the Concerto Competition at the University of Montreal and was awarded the second prize at the Festival du Royaume. 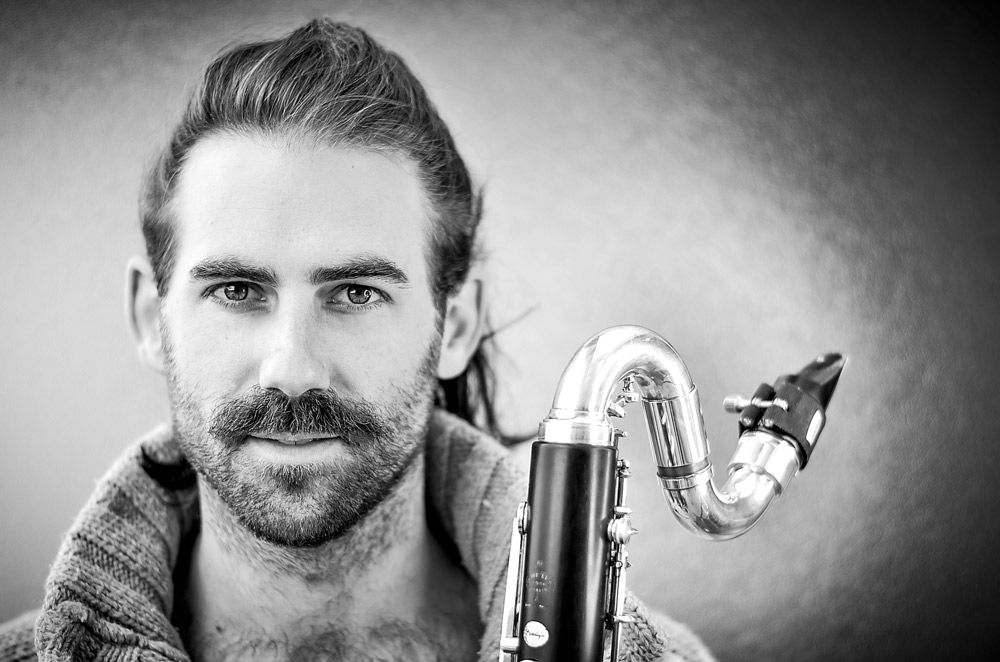 Born in Outaouais in 1991, Gabrièle Dostie-Poirier became a member of the Orchestre Métropolitain in November 2014 as a second bassoon player. She is regularly asked to play with Quebec musical formations. Violons du Roy, I Musici, symphonic orchestras like Montreal, Laval, Trois-Rivieres, Drummondville, Sherbrooke, Longueuil, Gatineau regularly ask for her services. This young bassoonist takes part in international tours with Orchestre Métropolitain and Violons du Roy. We can also hear her in recordings with ATMA, SONY Classical, Deutsch Grammophon, National Film Board of Canada and Tele-Quebec (for Genial!’s tv show). She played with the Orchestre symphonique de l’Agora since the first concert in 2013 and is now officially occupying the first bassoon chair.

She studied at Montreal Conservatory with Mathieu Harel and Stéphane Lévesque. Her studies ended with distinctions prices in chamber music and in bassoon. During her musical training, Gabrièle went to different summer academies such as: Pablo Casals’s Festival, Prades (France), Domaine Forget, Orford Arts Centre Academy for orchestra and octet programs, Brooke Valley Bassoon Days, Orchestre Réseau, National Youth Orchestra of Canada. Before playing the bassoon, she studied the violon with Vivaldistes de l’Outaouais between 1995 and 2010.

Élise began playing oboe at 12 years old at Joseph-François-Perrault high school. She then went on to study with Lise Beauchamp at the Conservatoire de musique de Montréal and Olivier Doise at the CRR de Boulogne-Billancourt in Paris. She is currently enrolled in the doctoral program at the Université de Montréal under Vincent Boilard and Caroline Traube and she teaches oboe at Pierre Laporte high school and the Coopérative des professeurs de musique. 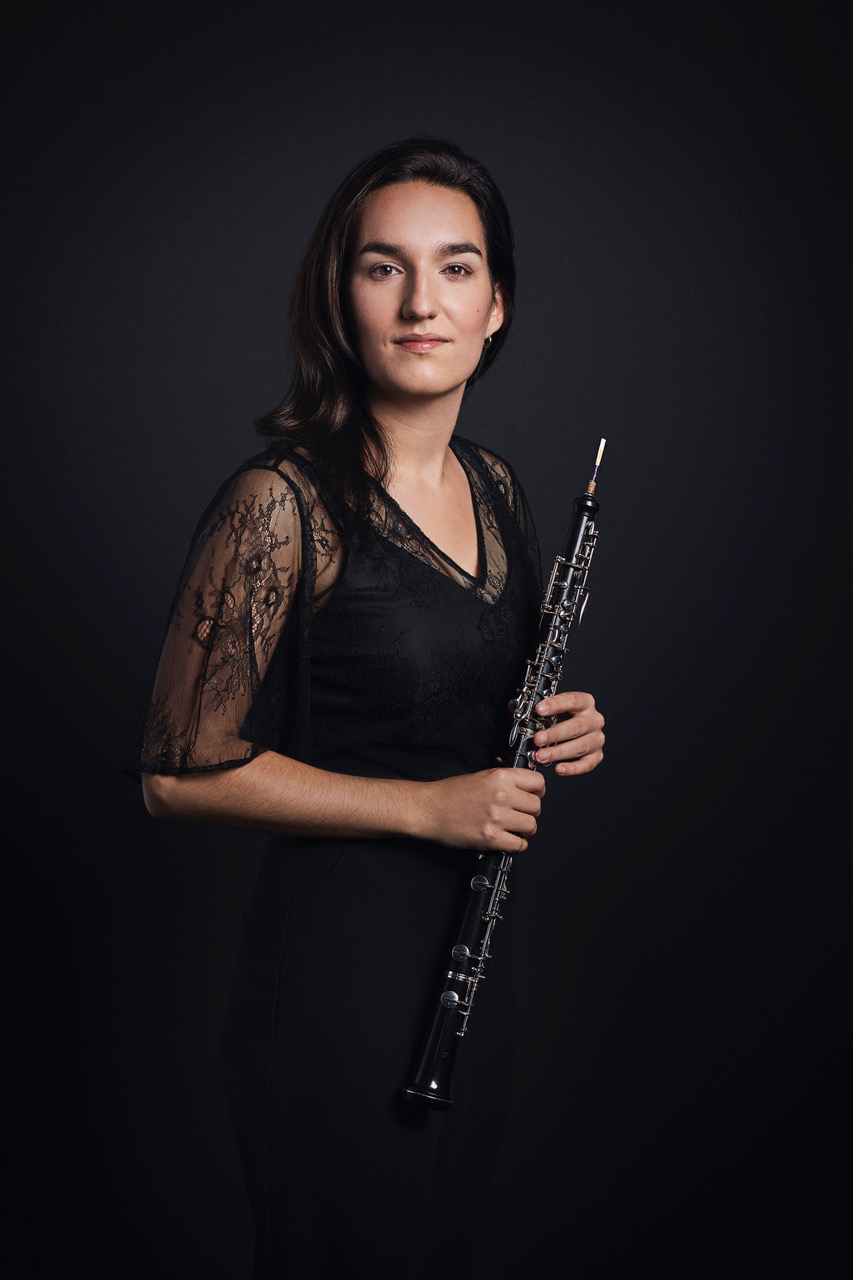 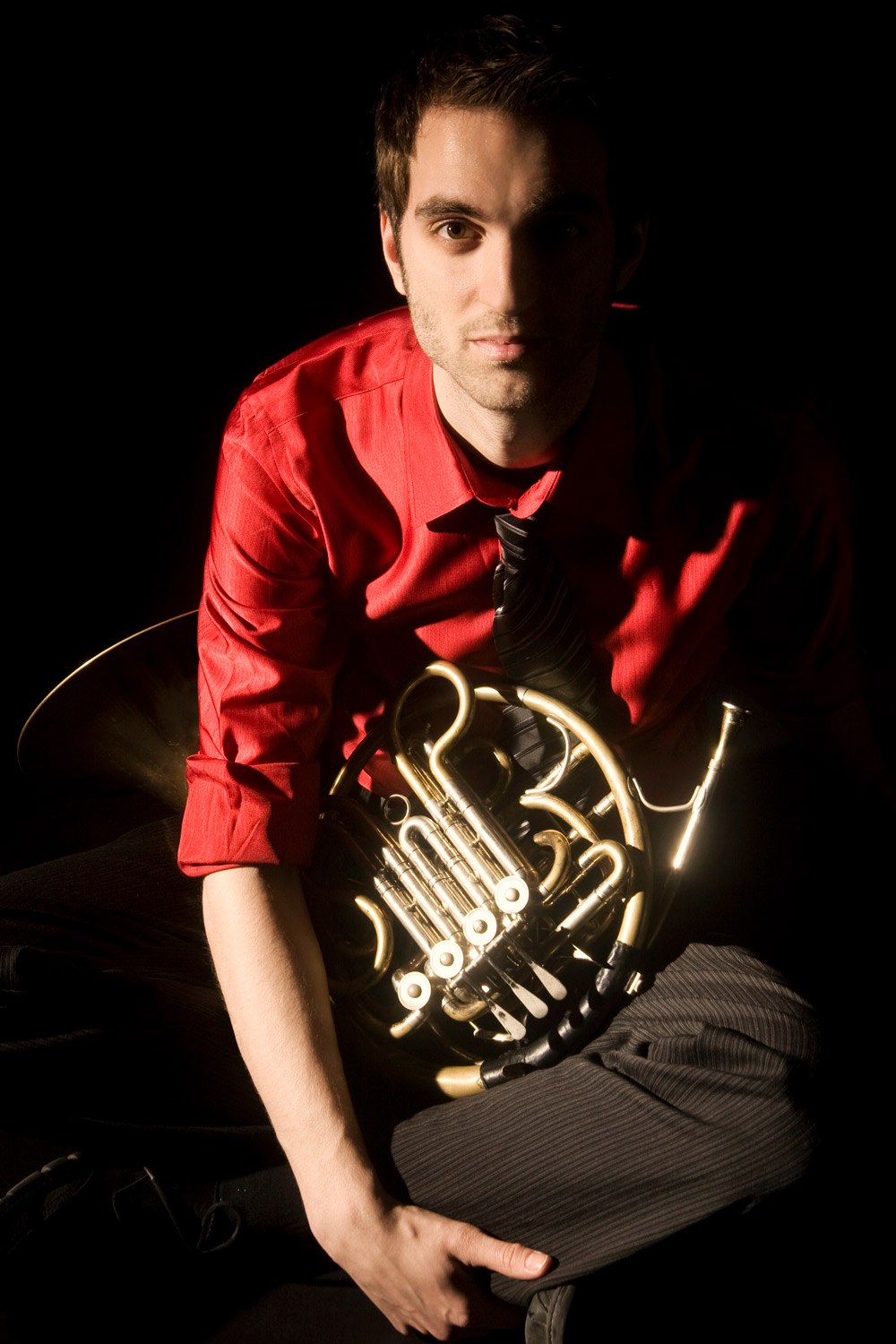 Guillaume starts learning music at age 10 on the piano, and 3 years later on the horn. After studying at the Conservatoire de musique de Rimouski, he then moves to Montreal to study with Denys Derome at McGill University where he completes his Bachelor’s and Master’s Degrees in performance.

In the summer of 2009, he acts as principal horn for the Montreal Youth Orchestra tour in Belgium and Germany. In June of 2013, he is invited to play, as a brass quintet member, for the celebrations of the Normandy Landing’s 74th Anniversary in Courseuilles-sur-Mer, France. He has been a member of the Orchestre symphonique de l’Estuaire from 2001 to 2016, and frequently performs as a freelancer throughout the province of Quebec with the Montreal Symphony Orchestra, the Orchestre symphonique de Québec, the orchestras of Longueuil, Laval, Sherbrooke, Trois-Rivières and Saguenay, and many different chamber music ensembles.

Passionate about music in all its forms, he is also an avid arranger and orchestrator, as well as an active teacher in the greater Montreal area.

Uruguayo-Quebecer percussionist based in Montreal, David Therrien Brongo has a career as a performer, educator and researcher. Founding member of the Duor AIRS and Orchestre de l’Agora, David is also a member of Ensemble Paramirabo. He regularly performs with the Orchestre Métropolitain, the Nouvel Ensemble Moderne, Sixtrum and the Ensemble Contemporain de Montréal (ECM +). Active on the international scene, David has performed in England, Denmark, Spain, Mexico, France and across Canada.

Dynamic and applied pedagogue, David is frequently called upon to give workshops and master classes. He was artist-in-residence and percussion teacher at the Domaine Forget International Academy in 2017 and 2019. He taught at the Université d’État d’Haiti, at Vive la Música en Panguipulli (Chile), the Malta Youth Symphony (Malta) and the municipal orchestra of Igualada (Spain). Since 2015, he has been coordinator of the Les Ambassadeurs project, a group of teaching artists devoted to teaching music, particularly in a context of social engagement and community involvement and working mainly in Haiti.

David received his Master’s degree from University of Montreal. He also holds an Artist Diploma and a Bachelor’s degree from the same institution. David also studied at the Superior School of Music of Catalonia in Barcelona. He is now pursuing his doctoral studies at the Schulich School of Music of McGill University with Fabrice Marandola. He is the recipient of the Guy Soucie Award for the best performance of a Quebec work at the prestigious Concours Prix d’Europe in 2017 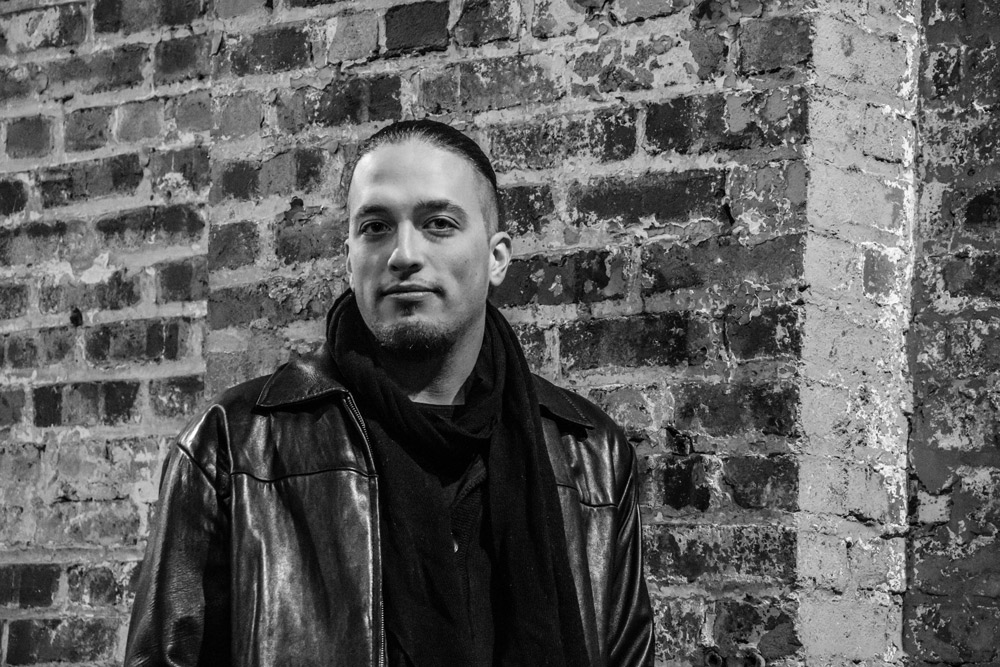